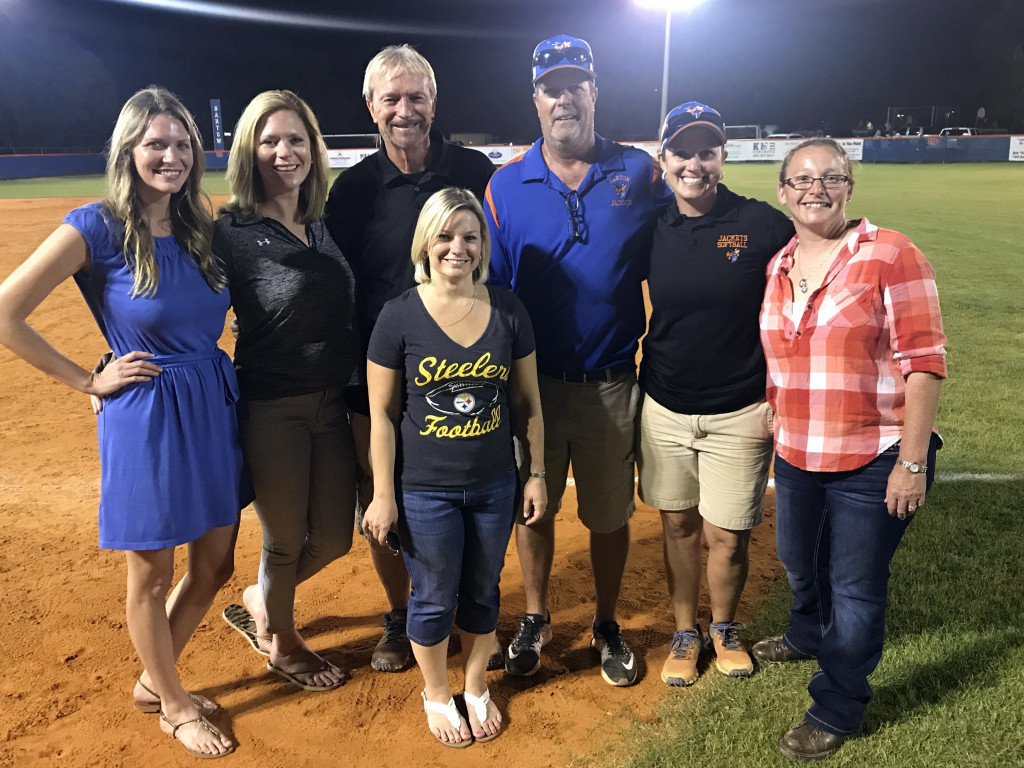 http://www.theledger.com/storyimage/LK/20170511/SPORTS/170519565/AR/0/AR-170519565.jpg?
By Roy Fuoco
Twenty years ago, Bartow was considered the top program in Polk County entering the 1997 season, although the gap between them and other top programs, especially Lake Wales, wasn’t a large one.

Then came the 1997 state tournament. Bartow knocked off two higher-ranked teams to win its first title, and Bartow separated itself from the rest of the teams. Players from that year, including pitcher Melissa Parsons who was the first pitcher in the state to pitch in four consecutive state title games, gathered recently to celebrate that time and were honored at the district championship game.

“It’s such a culture here, and I’m really proud to be part of it,” Parsons said. “At the time when it started, I had no idea what was going to happen.”

It might seem inevitable that Bartow was headed in that direction, but was it? Entering 1997, Auburndale had won the county’s only state title, that coming in 1988 when there was just one classification and hadn’t been back to the state tournament.

Bartow had been to four in five years with a state runner-up finish in 1994. But although the Yellow Jackets consistently beat Lake Wales in the regular season, the Highlanders were coming off back-to-back state runner-up finishes and had ended Bartow’s seasons in each year, winning in the regional final in 1995 and in the district semifinals in 1996, which was the last time Bartow failed to make the playoffs.

And in 1997, second-year Lake Region was ready make its mark in high school softball and in fact beat Bartow in the district championship game.

Rutenbar felt some pressure that season.

“I’m kind of thinking, man, is this not be or is it going to happen, but I kept that to myself,” Rutenbar said. “I certainly didn’t let that get to the kids.”

After missing the playoffs in 1996, he didn’t have to tell the players.

“I think were absolutely embarrassed and coming around to the 1997 season, we talked about being embarrassed and not wanting to get knocked off early and wanting to make a playoff run,” said current head coach Donna Byars, who was a junior second baseman in 1997. “I just remembered we had a lot of conversations about what we wanted to do. We just took one game at at a time, and we just knew where we wanted to go. Each one of us, we gave everything we had every game, and if someone didn’t they were held accountable by other teammates.”

Bartow entered 1997 as a strong team as usual, but there were questions. Christie White, a top shortstop, decided to give up softball to focus on volleyball, leaving a hole at short that was filled by freshman Krissy Wilkerson, a solid defensive player but not the hitter White was.

After the graduation in 1995 of Julianne Coleman, who went on to star at Florida Southern, Leann Black and Lauren Wallace took over in 1996, but Black was ineligible in 1997 leaving the pitching duties to Wallace and Parsons, an incoming freshman.

Parsons emerged as the No. 1 pitcher. In addition to winning as a freshman, Parson won a state title as a senior, when she came back from injury and gutted in out by force of will with an inspiring effort.

“Melissa was really competitive on the field,” Rutenbar said. “I don’t think people realized it because she didn’t show anything. She was just pretty stoic. But when she got in the dugout, if something happened, she’d get upset but you’d never think that on the field watching her. All the kids were competitive. They really wanted that game.”

The ’97 squad wasn’t Rutenbar’s best team — the 2003 national championship team holds that honor — but it certainly would hold its own against any of the other championship Bartow teams. The top of the order, especially, was tough.

Byars, who set a school record with 63 hits that season, was the leadoff batter and played second base. She remains one of the best pure hitters the Yellow Jackets have had and was excellent defensively. With Parson emerging as the ace, Wallace, who got some starts pitching, was a dangerous hitter and played first. Catcher Toni Rehberg batted third and is one of the top three or four catchers to play for Bartow. Not the power hitter of a Lexy Sims or Kensie Green, she was none-the-less a dangerous hitter.

Clean-up hitter Michon Chunn was one of the power hitters of that era and excellent defensively. Shelley Sanz, who with Parsons won another title as a senior, was another key bat in the middle of the order. Third baseman Vicki Howell, center fielder Jillian Palmer, Wilkerson and Scoot Godwin, who hit for Parsons, rounded out the starting lineup.

A pair of Carolina wrens deliver insects to the nestlings Friday morning on the screened porch of a home in northwest Lakeland.

A turning point in the playoffs game in the second round of the playoffs. Parsons got hit in the stomach by a line drive and battled on. And the shutout was preserved when a ball was hit over the head of Palmer in center. She dropped her glove to race after the ball, threw to Wilkerson, who relayed home to Rehberg to nab the runner.

“That was a moment where were realized we’re going to make it to state this year,” Byars said.

Back then the district champion and district runner-up from the same district wouldn’t meet until the state title game, and Bartow had to go through undefeated South Lake, the No. 1-ranked team in the state, to meet Lake Region in the final.

South Lake had dominated its opponents but was one of the new teams to fastpitch and didn’t play a tough schedule like Bartow, which always played Naples during the season.

Bartow exposed South Lake, beginning with Byars, who was a big contributor in the state tournament for Bartow.

Byars, who went 3-for-4 with a double, led off the game by ripping a double. The Yellow Jackets scored four runs in the inning and went on beat South Lake 10-0 in five innings. Parsons retired the first 11 batters she faced and finished with a one-hitter with six strikeouts.

Then came Lake Region. The Yellow Jackets were in a good frame of mind after beating South Lake.

“I think it helped our confidence, but I knew we weren’t going to win 10-0,” Rutenbar said. “We both knew each other. We knew if we played our game, we had a chance to beat them.”

Bartow took the first lead. Wallace’s RBI single in the third gave Bartow a 1-0 lead as Parsons and Lake Region’s Cari Chewning were locked in a pitching duel.

Byars’ error in the sixth led to Lake Region tying the score.

“I remember dropping the ball and I’m like, I just lost this for my team,” she said. “I can’t believe it. In the state semifinal game, I dropped the ball.”

Byars made up for it in the seventh. She singled and scored the game’s winning run on a single by Rehberg, then made the last two outs of the game defensively on a pop-up and ground ball.

“I really had no clue what state was all about,” Sanz said. “We knew it was a big game, but going into it, I really ideally didn’t have any idea of how big it was to our town and to us until we won that game. It was just the biggest moment of my entire softball idea. It was mind-blowing.”

Seeing how big Bartow’s state championship win in football the previous fall was to the Bartow community, the win had extra meaning for Parsons.

And so they did.