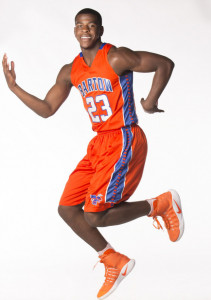 Why We Picked Him

Despite the graduation of Tony Bradley, last year’s Mr. Basketball, Bartow matched its record of 19-10, won the district title and came within three points of reaching the region final again. Harvin was the major reason why. He raised his game, became more of a scorer but still played shutdown defense. Harvin averaged 14.7 points, 3.2 rebounds, 3.4 assists and 1.4 steals against a tough schedule. He was a unanimous selection as the FACA District 12 player of the year and the pick of most coaches for the county player of the year. For his career, he reached 1,000 points, 400 assists and 400 rebounds and became the sixth Yellow Jacket in 15 years to reach 1,000 points.

“He without question was the best perimeter defender we have had in six or seven seasons.” — Bartow coach Terrence McGriff.