By Roy Fuoco
Bartow senior guard T.J. Harvin has come a long way since eighth grade year when he first came to the attention of Bartow head coach Terrence McGriff. At that time, Harvin was as much a football player as he was a basketball player, and even in basketball, he wasn’t a point guard.

After four years of high school, one thing is clear. Harvin is basketball player and a top point guard to boot. He is on his way to Lincoln Memorial University in Tennessee after signing with the school on Friday in his final day at Bartow.

“It’s great,” Harvin said. “I’m blessed to have a scholarship and to be able to play basketball at the next level. It’s something I’ve always dreamed of.”

Harvin said on Friday that he planned on leaving for Lincoln Memorial on Monday and will enroll over the summer.

“They just wanted to me to come early to get training in — weight training, stuff like that,” Harvin said.

Harvin played both basketball and football growing up and while he was a talented basketball player, he didn’t have point guard skills coming into high school because he wasn’t playing point guard. He quickly picked up the skills as he was thrown into that roll as a freshman and became the only player since Bartow started taking freshmen in the early ’90s to start on fourth consecutive district championship teams.

Harvin went on to start in the state championship game as a freshman when the Yellow Jackets finished state runners-up and capped his high school career as The Ledger’s 2016-17 Boys Basketball Player of the Year.

“We didn’t know he was going to do that,” McGriff said. “It was unbelievable. He kind of got thrown to the fire. That second year, he emerged as a solid point guard. He wasn’t great, but he was solid. This year, he was an elite point guard.” 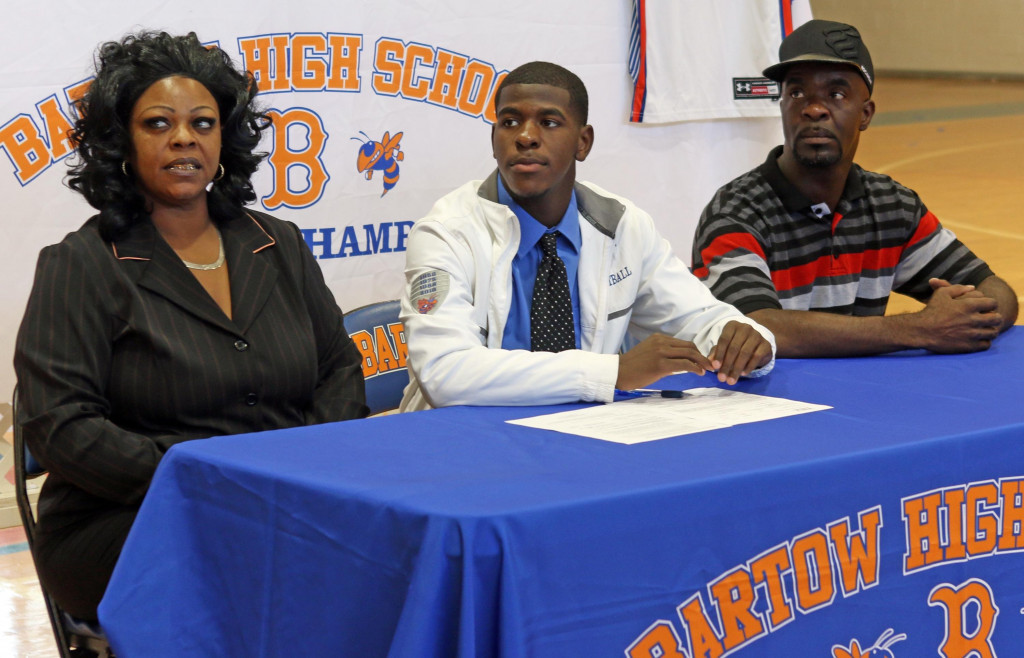 “For him to make the commitment to be a full-time basketball player, it was a risk,” McGriff said. “We wanted him to play football.”

McGriff noted that Harvin was giving up the possibility of getting a football scholarship.

Harvin came into his senior season with even more on his shoulders after the graduation of Tony Bradley, but Harvin said it didn’t change his approach to the game.

“I didn’t try to do anything extra,” he said. “I just tried to play as a team and make sure my team gets better every day at practice and put in the extra work.”

Harvin, who plans on majoring in chemical engineering and computer science, will see familiar faces in college. Jeremiah Samarrippas, the point guard who led Bartow to the state title in 2010, is an assistant coach. Former teammate Chris Perry transferred from USF to Lincoln Memorial and played his senior year there this past season.

“I’ll have someone who is there for me because I’ll be far away from my family,” Harvin said. “I felt like home when I went there for a visit.”

Lincoln Memorial is currently a Division II school but will be moving up into the Atlantic Sun Conference.

“He’ll do well there,” McGriff said. “They think they got a steal.”