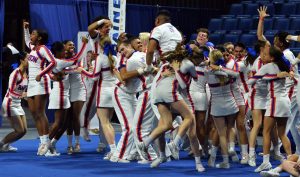 Bartow cheerleading won its fifth-consecutive state championship and sixth overall title at the Class 2A state finals in the Exactech Arena at the Stephen C. O’Connell Center at the University of Florida, racking up 82.3 points, easily besting second-place Fleming Island (76.60) in the Large Co-Ed Tumbling division.

GAINESVILLE — On Super Bowl Sunday, Bartow won one for the thumb.

The Yellow Jackets’ cheerleading team won its fifth-consecutive state championship and sixth overall title at the FHSAA Class 2A state finals in the Exactech Arena at the Stephen C. O’Connell Center at the University of Florida, racking up 82.3 points to easily best second-place Fleming Island (76.60) in the Large Co-Ed Tumbling division.

“I am just so proud of these kids. It was not an easy week. We didn’t tell people what are struggles were. We had kids going through injuries and sickness,” Bartow coach Lori Joliff. “When you have so much invested, you want the kids to do so well. We had alumni drive from out of state to be here.”

Though they mesmerized onlookers at the arena with an array of flips and towering stunts, Joliff said the performance wasn’t flawless. Her experiennced group knew exactly what to do to win.

“We had an early pop-off and some timing issues on some tumbling,” she said. “The big thing people will notice is we had a sign that didn’t go. … But they kept the girl up and we had trained them if a sign drops, leave the sign alone and get the girl back in.”

Both Lakeland and Bartow vaulted straight into the finals competition, skipping the semifinals, after racking up more than the 70-required points at the Region 3 meet Jan. 27 at Plant City.

Bartow senior Martes Johnson has been part of the team for three years and she was proud the group could carry on the Yellow Jackets’ winning tradition.

“It was nerve-racking but we just remembered it is muscle memory and what we do in the practice room is the same thing we should do out here,” she said. “When I heard Bartow called (as state champions), my best friend burst into tears.”

Another Bartow senior, Zachary Martin, has been part of the team for two years but he broke his foot last year and could not compete at the state finals.

“It was my first year on the mat and I was so nervous, but as soon as I walked out there, everything went away and it felt like practice out there,” Martin said.

Bartow will move on to the UCA national championships next week at the ESPN Wide World of Sports in Orlando.

“I was so excited for Jenkins and Lakeland. I am so proud of what the 2A schools did for Polk County and I am looking forward to what the 1A schools for Polk are going to do,” Joliff said.